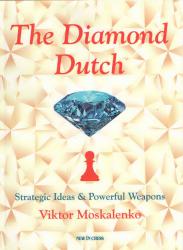 Autor: V. Moskalenko, vydané 2014, 271 strán. "The Dutch Defence is a diamond in the treasure box of modern chess openings.” -- Viktor Moskalenko The widely-played Dutch Defence is a sharp choice. Black does not try to preserve a positional balance, but chooses to fight it out. No author is more qualified to explore new ideas in the Dutch than Viktor Moskalenko, a renowned champion of dynamic play. The Diamond Dutch is not a repertoire book. Moskalenko himself plays this chess opening with both colours and covers the entire spectrum for White as well as Black: -- various Anti-Dutch weapons -- the Stonewall System -- the Classical System -- the Leningrad System. As Moskalenko thoroughly shakes up the lines of yet another chess opening, he keeps both the strategic principles and the tactical finesses firmly in sight. He presents a host of novelties, daring recommendations, new resources and cunning tricks. As always he describes his ideas in his inimitable style full of humour and enthusiasm, and illustrates them with plenty of his own games. Viktor Moskalenko (1960) is an International Grandmaster and a well-known chess coach. The former Ukrainian champion has won many tournaments in Spain, his new home country. He is the author of The Fabulous Budapest Gambit (2007), The Flexible French (2008), Revolutionize Your Chess (2009), The Wonderful Winawer (2010) and The Perfect Pirc-Modern (2013). Glenn Flear, author of 'Starting Out: Open Games': "These days there is a tendency for books on the Dutch to touch only one system, here you have everything, and even with handy antidotes from White's point of view. There are plenty of themes and general strategy for more modest readers, as well as some cutting-edge theory which will challenge oppenents of all standards (..) Books by Viktor Moskalenko are always great fun. They are the perfect medicine if you suffer from opening preparation blues!(..) For anyone who comes into contact with the Dutch, a gem and a valuable one at that!"