﻿﻿﻿﻿﻿﻿﻿﻿ The Berlin Defence Unraveled: A Straightforward Guide for Black and White | Qulity chess a new in chess | Sachypalka.cz
﻿ 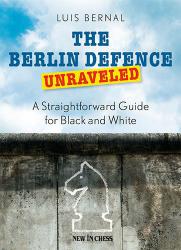 The Berlin Defence Unraveled: A Straightforward Guide for Black and White

The Berlin Defence has been a highly popular opening in top level chess ever since Vladimir Kramnik famously used it in the 2000 World Championship match to wrest the title from Garry Kasparov. Club players often hesitate to include ‘the Berlin’ in their repertoire because they see the typical Berlin Wall endgame as complex and daunting. International Master Luis Bernal has unraveled the Berlin and made it accessible for amateur players. His practical guide is fully up to date, explains typical formations and strategies, and presents new ideas and resources in the old Berlin Wall structures. But today, the Berlin is much more than just the Wall. Bernal systematically leads you through the labyrinth of the various modern Anti-Berlins with their constant flow of new ideas. He also presents a number of tricky sidelines that could catch your opponent off guard. This no-nonsense, state-of-the-art guide finally brings this important chess opening within reach of club players. With clear explanations, concise conclusions and didactic exercises. Luis Javier Bernal (1971) is an International Master from Spain, an experienced chess trainer and a well-known journalist.