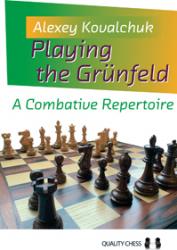 The Grünfeld Defence is well known to be one of Black’s best and most challenging responses to 1.d4, and has long been a favourite choice of elite players including Kasparov, Svidler, Caruana, Vachier-Lagrave and many more. As with many openings, however, it can be difficult to navigate the ever-expanding jungle of games and theory. Playing the Grünfeld offers an ideal solution for practical players. Alexey Kovalchuk is a young Russian talent with expert knowledge of the Grünfeld, and in this book he shares his best ideas to form a complete, coherent and combative repertoire for Black. In addition to theoretical soundness, efforts have been made to avoid variations leading to early forced draws, as well as those in which Black allows his king to be attacked at an early stage. Alexey Kovalchuk is a Russian player whose rating reached 2445 in recent years, so he can be considered an ‘IM without the norms’. In additional to winning the Rostov Championship and numerous other tournaments, he is a theoretician who works as a second for strong GMs.

The Attacking Manual 1 by Jacob A...