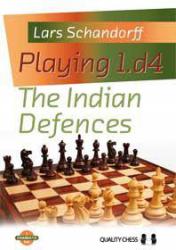 Digital Version Available from Forward Chess (read more) Playing 1.d4 – The Indian Defences is part of an ambitious two-volume repertoire for White with 1.d4. This book covers all lines except 1...d5. Schandorff presents the ideas and information in an accessible and entertaining style. The repertoire is based on classical lines and inspired by Botvinnik’s approach. White will dominate the centre and repel all Black’s attempts to seize the initiative – only White is allowed to attack! The repertoire is completed by Playing 1.d4 – The Queen’s Gambit. Lars Schandorff is a Danish Grandmaster who is renowned for his deep opening preparation. Reaction to Schandorff’s book on the Queen’s Gambit: “Lars, I want to play your book” – GM Boris Avrukh “Very well-written and an excellent choice for ambitious players” – Carsten Hansen