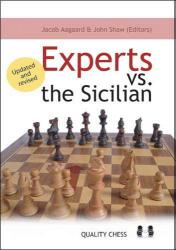 Experts vs the Sicilian 2nd edition by Aagaard & Shaw

As recommended to his own journalist pupil by Nigel Short in the Guardian. The Sicilian Defence is the most popular opening at all levels of tournament play from Linares to the local club championship. The Sicilian is played regularly by Kasparov, Anand, Kramnik, Leko, Topalov, and Shirov – a.k.a. the best players in the world. In this book a multinational line-up of leading experts give recommendations against their own pet lines in the Sicilian Defence. This repertoire book recommends the critical main lines and reveals Black’s greatest fears to you. Experts vs. the Sicilian is the no-nonsense opening repertoire for players of all strengths who want to teach the Sicilian players a lesson or two... The authors in this book are. Grandmaster Peter Heine Nielsen vs. the Accelerated Dragon. Grandmaster Sune Berg Hansen vs. the Taimanov and the Paulsen. Grandmaster Viktor Gavrikov vs. the Scheveningen. Grandmaster Peter Wells vs. the Classical Sicilian. Grandmaster Mikhail Golubev vs. the Sicilian Dragon. Grandmaster Thomas Luther vs. the Najdorf. Grandmaster Alexander Raetsky vs. the Four Knights Sicilian. Grandmaster John Shaw vs. several minor lines. Grandmaster Jacob Aagaard vs. the Sveshnikov & several minor lines. International Master Jan Pinski vs. the Kalashnikov. This 2nd edition is a re-typeset version of the 2004 title into a bigger format. In the process about 75-100 changes, additions and updates of the theory has been added